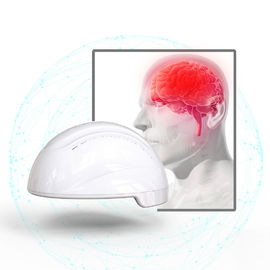 Brain photobiomodulation (PBM) with red to near-infrared (NIR) light emitting diodes (LED) could be an innovative therapy for a variety of neurological and psychological disorders. Red/NIR light can stimulate mitochondrial respiratory chain complex IV (cytochrome c oxidase) and increase ATP (adenosintriphosphate) synthesis . In addition, light absorption by ion channels leads to the release of Ca2+ and to the activation of transcription factors and gene expression. Brain PBM therapy could improve the metabolic capacity of neurons and is able to stimulate anti-inflammatory, anti-apoptotic and antioxidant responses as well as neurogenesis and synaptogenesis . Findings suggest that PBM may enhance, for example, the frontal brain functions of older adults in a safe and cost-effective manner.