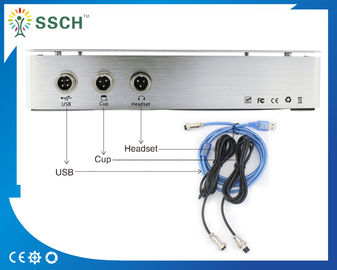 The main feature of Metapathia GR Hunter software is function called “Three-dimensional Scanning” which allows to localize automatically a nidus where tumor appeared,heritable diseases, etc. and to find the reason of appearance at genome level, passing one after another histological cuts, cytological cuts, chromosome sets,
separate chromosomes, and go deeper to fragments of DNA helix.

impact. "Metatron" allows correlating the measurement process with the process affecting it and performs the following

operations:
1) It measures J (0) which mirrors the change of the describing parameter, and the entropic potential relative to its initial value;

Computer models also give physicians a three dimension projection of internal organs. Colored marks placed upon the picture make it easier for the doctor to determine the site of pathological process. It is possible to judge the process of disintegration of these biological structures, and to make prognosis, by comparing the range of colors of the marks and their arrangement on the computer model of the organ, using the dynamics of their change over a period of time.

The researches of the Institute succeeded in producing this most effective equipment that is capable of tuning to the frequency of the master pulses automatically without human intervention, as well as, detecting and correcting defects and pathologies in organs and body cell on its own. This is achieved through combination of different specifically modulated magnetic oscillations recorded on a matrix. The fundamental concept in the development of this equipment was the hypothesis that the human body has an electromagnetic information framework that is able to respond to external radiation.