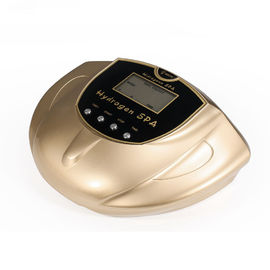 As we all know, the human body is composed of cells, human disease can ultimately be attributed to cell damage, the aging is due to cell aging, the main culprit of cell aging or necrosis is reactive oxygen.

Under normal circumstances, the continuous generation of reactive oxygen in the body, but also continue to be cleared in a dynamic equilibrium. But in pathological conditions ischemia, inflammation, the body will produce large amounts of reactive oxygen. Among them, the hydroxyl radical and peroxynitrite have strong toxicity, is a major mediator of cellular oxidative damage. While the toxicity of nitric oxide, superoxide anion and hydrogen peroxide are weaker, play an important role in signal transduction.

2007, the Japanese Medical University, Shigeo Ohta and other professors demonstrated that the hydrogen can selectively neutralize the highly toxic hydroxyl radicals and nitrite anions. Reduced to water, discharged in vitro. While have little effect on the other reactive oxygen of important biological functions and low toxicity. Namely hydrogen selective antioxidant effect.

Absorbed hydrogen can be transported to the body through the skin's blood, and then play a role in health care.

4, Absorbed hydrogen can be transported to the body through the skin’s blood, and then play a role in health care.

3, Skin is the largest organ of body with very large capacity to absorb hydrogen.

(1) Connect the hydrogen generator to the bubble bath host.

(2) Put the hydrogen generator into the water.

(5) According to your need, choose "time increase" or "time reduce", default time is 30 minutes.

(7)When the bubble bath machine work, the curve on LCD screen "MODE" flashes , prompting that the instrument is working, time T countdown display , the voltage V displayed value between about 12 to 18V, current A display value between about 0.5 to 2.8A.

1, Women who are pregnant or in the physiological period.

2, People with cardiac pacemakers and other artificial organs.

6, People who are too young or too old.

8, People who are sensitive to current.

Shipping:
1. FedEx/DHL/UPS/TNT for samples, Door to Door;
2. By Air or by Sea for batch goods, for FCL; Airport/ Port receiving;
3. Customers specifying freight forwarders or negotiable shipping methods!
4. Delivery Time: 2 to 5 days for samples; 5 to10 days for bulk order.